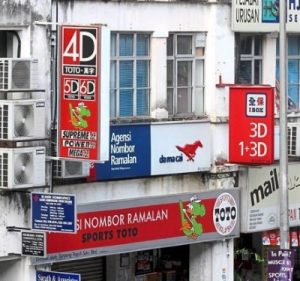 The revenue for the quarter rose 2.72% from RM1.37 billion RM1.40 billion because higher revenue reported by H.R. Owen.  The higher earnings received a boost thanks to their London-based luxury car dealer H.R. Owen Plc.

In addition the lower prize payouts by core subsidiary Sports Toto also held these numbers. These numbers were however affected due to lower revenue from Sports Toto and Philippine Gaming Management Corporation (PGMC).

For BToto share owners, this is good news as they declared a third interim dividend of four Sen per share.  The dividend is for the financial year ending April 30, 2018 and is payable on May 3, 2018.

According to a press release, BToto is wary of the next quarter earnings.

“With the continued rampant illegal gaming activities and weak consumer sentiments, it is expected that our core NFO business undertaken by Sports Toto would be challenging for the remaining quarter of the financial year ending April 30, 2018 (FY19),” it said.

The company has already seen a drop in revenue of 3.3% compared to last year’s fourth quarter.  The company; however, remains positive and expects to see a growth in its future market share. Many sports betting company in Asia are closely watching how the fourth quarter will turn out.

“Notwithstanding these challenges, the directors are confident that the group will continue to maintain its market share in the NFO business for the remaining quarter of the financial year ending April 30, 2018,” it added.

Berjaya Sports Toto Bhd is an investment holding company that is listed on Bursa Malaysia. BToto has been around since 1969 and today operates hotels, health and many other holdings.  It also operates Toto betting in Malaysia and on the international market. Another aspect by the company company is the leasing of online lottery equipment; provision of sports betting software and technical support services.