Caesars Sportsbook has one of the most memorable ad campaigns featuring JB Smoove as its spokesperson. The ads promoted the company’s sports wagering offering via Roman-themed advertisements. After that, however, the company promised to reduce its sportsbook advertising spending.

Caesars’ TV spots featured Eli, Archie, and Peyton Manning, among other celebrity cameos. However, you shouldn’t expect that many ads from the company in the future. According to CEO Tom Reeg, they will limit their traditional media spending.

Reeg said during the company’s fourth-quarter earnings call that they have already accomplished their marketing goals. Also, they became one of the top sportsbook operators in the US quicker than their expectations. Thus, they are saving money by not spending it on advertising. 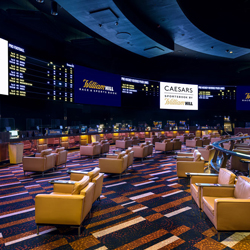 According to per head sportsbook reports, Caesars got 21 percent of sports betting handle in the US in January. That includes Illinois and Pennsylvania, where they have two percent and one percent of the market share, respectively.

In their initial business plan, Caesars has market share expectations. The company already exceeded them. Thus, they optimize their profitability by cutting their advertising expenses, including sportsbook social media marketing.

Caesars’ total income for 2021 was $9.6 billion, which was practically triple the income it counted in 2020. The organization announced an overall deficit of about $1 billion for the entire year.

Caesars additionally stays open to selling one of its properties on the Las Vegas Strip. Its Las Vegas Strip resorts are Bally’s, Caesars Palace, Planet Hollywood, Paris Las Vegas, The Cromwell, The LINQ, Harrah’s, and Flamingo.

Start a sportsbook with SportsBettingSolutionAsia.com!