The Thai Health Promotion Foundation held a conference to discuss the growing Thailand youth gambling problems. Present in the event were civic groups that are alarmed by the development.

The foundation scheduled the meeting after receiving the report from the Research Center for Social and Business Development. The report showed that more than half of the Thai population engaged in gambling activities.

The Center for Gambling Studies based the report on a survey of 44,000 people aged 15 years old and older in 77 provinces. According to the report, 30.42 million Thais gambled, which was an increase of 1.50 million from 2017. 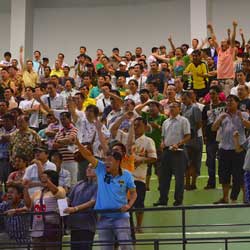 Around 2.4 percent of the Thai population who gambled were between the ages of 15 and 18 years old. When considered, that’s 21 percent of the age group. That means 1 out of five youth aged 15 to 18 in the country is already gambling.

When learning how to be a bookie agent, make sure you vet your players careful. That way you can stop minors from placing bets on football matches. According to problem gambling experts, people gamble for different reasons, including entertainment, competitiveness, loneliness, boredom, depression, and a temporary boost of confidence, just to name a few.

Most Thai youths questioned said that depression is the reason they turned to gambling. However, it can also be an effect instead of the actual cause. The sad news is that most teenagers suffering from clinical depression in Thailand don’t get proper treatment.

At present, around one million Thai teenagers have depression. Also, two million teenagers are at risk. That’s three million out of the total eight million teens in Thailand. Most of the calls made to the Department of Mental Health hotline came from young folks aged between 11 and 25 years old.

It seems like Thai authorities want to blame gambling for the growing depression problem in their country. If you are running a white label sportsbook, make sure to stop minors from registering on your website. It is one way of doing your part in ensuring the sports betting industry doesn’t contribute to the problem.