Arizona State beat North Dakota in front of more than 15,000 fans of the latter last Saturday Night. The 3-2 win is the highest-ranked victory for the Sun Devils since they won against ranked 4 Denver on December 6, 2019. Also, the team remains undefeated in Las Vegas.

UND scored the first goal of the desert battle a little over seven minutes into the first period. Two minutes later, the Fighting Hawks earned their first power play of the game and converted with a power play goal to increase their advantage to 2-0. 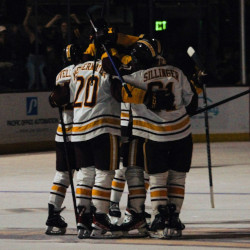 After a calm first period, the second period erupted with ASU’s second power play of the night. Junior forward Lukas Sillinger scored the game-tying goal from the top of the circle, his second of the season, with helpers from Kopperud and senior forward Robert Mastrosimone.

According to bookie PPH records, ASU killed three penalties and silenced the Fighting Hawks’ power play, which was second in the NCAA with a 35.5 % before Saturday night’s game.

Nothing screams, “we’re back for the third period,” like a goal in the first 24 seconds. Then, Mastrosimone took the lead with a goal of his own, assisted by Sillinger.

According to sports news, ASU blocked 22 shots, the most blocks for the season. Also, TJ Semptimphelter got 13 saves during the ninth straight starts for the team. UND was kept scoreless for two periods for only the second time this season. The Fighting Hawks scored two goals in the first period against Quinnipiac. However, they lost 6-2 after being kept scoreless in the second and third periods.

Using a pay per head system is the best way of becoming a hockey bookie. To get the most bang for your buck, we recommend SportsBettingSolutionAsia.com.